The 15 Most Popular Airsoft Game Types and Modes 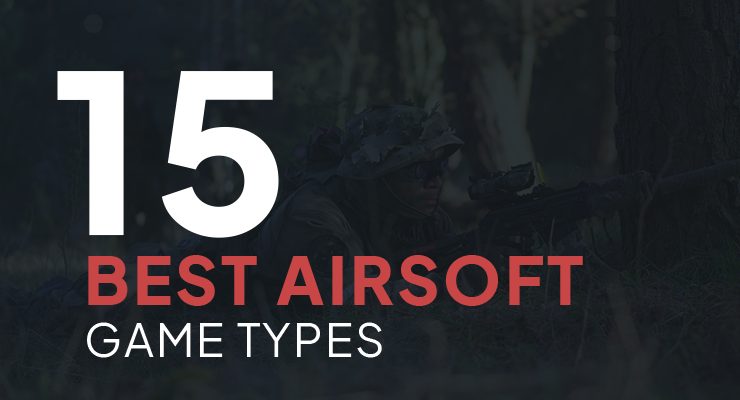 One of the great things about airsoft is the amount of game types and modes you can play.

A simple team deathmatch can be a great way to get the adrenaline going. You can also develop games based on military simulation to add realism.

We've compiled a list of the 15 most popular types of airsoft games to give you a heads-up on what you might experience out on the field.

Once a player has been shot, they cannot respawn until the next game. It makes for an adrenaline-filled free for all game mode.

The objective is, you guessed it, to be the last man standing.

There are variations of last man standing, which can make it more interesting—for example, limited weapons, ammo, or pistols only.

The fact there aren't groups of people fighting creates an unusual atmosphere, especially if it's played at night.

The last-man-standing game mode is a lot of fun, and if you can, we recommend trying this on a CQB map!

Headquarters is an airsoft game where two opposing teams battle to hold a single location.

This location doesn't rotate. It could be a building or a hill.

Wherever the headquarters is, be prepared for a lot of action. This idea is to move with a group. If you find yourself trying to take the headquarters alone, you'll likely end up back at spawn pretty quickly.

We recommend using a grenade (or multiple grenades) to get as many kills as possible while the enemy holds the headquarters. If you spend too long stuck in a single position because of enemy fire, you'll lose too many points to win!

The ideal gun for this game mode can vary between a pistol for sneaky play or a machine gun (support weapon) for overwatch and suppressive fire.

Domination is where multiple locations need to be held for the game's duration. The longer a team can control each zone, the more points they get added to their score.

The standard number of domination points is three.

Once a team captures an area, a timer will be started by one of the in-game marshalls. But don't get complacent.

Suppose the opposing players use an offensive strategy to attack two domination points simultaneously. In that case, it can be challenging to win them back.

Smoke grenades are great for distractions and cover. Any airsoft gun works well for domination.

Search and destroy has an attacking and defending team. Each round will see the attacking team try to plant bombs at two objectives before the timer finishes.

It's like the famous Call of Duty game type we all know and love.

You'll spawn with a single life until the end of the round, giving each team a player advantage. For example, if the defensive team manages to limit the attacking players' numbers, winning the game will be much easier.

Depending on the game site, there can be a variation in the total number of rounds played. But you can expect up to six rounds to win the game.

We're big fans of this game mode. You're only allowed to use certain airsoft pistols and shotguns, which makes for exciting gameplay.

It's a team deathmatch without the broad mix of airsoft guns. This restriction on available rifles can level the playing field quite quickly.

It's a great game to play against friends rather than teaming up with them.

Nobody wants to be hit by a shotgun up close, which is why a CQB environment makes the risk much higher. These game types usually last anywhere from 30 to 45 minutes in length.

But they're high-kill games, and anything goes.

Elimination airsoft games are often 45 minutes long. The team with the most players left alive at the end of the game is the winner.

Communication with your teammates is crucial for elimination. If you still need to invest in an airsoft radio, we suggest you do so sooner rather than later.

If you can speak with your teammate, you can prevent things like friendly fire or giving your position away to your opponent by shouting.

Depending on the time limit, medic rules can be involved in elimination. However, it can often result in stagnant gameplay, which is never fun for anyone.

A good old-fashioned zombie game is one of the most exciting airsoft modes you can play!

There are specialized sites across the US and UK where airsoft players can have an entire day of fending off zombies. All you need to play zombies is your M4, maybe a claymore, and plenty of BBs in your magazine.

Game times can vary from an hour to an entire day. Zombies usually have limited weapons, such as a knife or no weapons at all.

Hunted usually involves players being separated into three teams. The hunters are on nobody's side. The game's objective is to defend your team against the hunters and the opposing squad.

If a hunter kills you, you take your bands off and join the hunter's team. The point is, eventually, the team of hunters has more players than when they started.

What eventually happens is the game turns into a manhunt toward the end. If the hunters kill both teams, they win.

However, if non-hunters survive until the end (even one), the hunters lose.

Traitors are selected at the start of the game. The idea is that traitors can kill their team members without being caught. Once the traitor is found or stopped, the game's over.

Each team will have limited lives to ensure the traitor cannot be identified too early in the game.

This is the game mode if you want to see airsoft players turn on each other. Traitor game types are high-drama and high-energy.

Traitor games will last up to 45 minutes and are often played toward the end of the day.

The VIP game mode has a variety of special rules to tweak how the game plays. It's usually based on a VIP or a high-value target (HVT) somewhere on the game field that both teams fight over.

The VIP is usually on their own team and has an escort team to protect them. They might be an unarmed player or carry a weapon such as an airsoft pistol.

Both teams will find the VIP and take out their bodyguards, capturing the target. The team that gets the VIP player back to their home base wins.

Capture the Flag earns its place as one of the best airsoft game modes, usually played on an open day to get the entire team warmed up.

Capture the Flag consists of two teams fighting over territory to invade the enemy team's base and steal their flags. Practicing airsoft tactics can make a huge difference to who holds the most flags.

It's a great choice as a starter game, thanks to the mix of objective-based gameplay and a straight-up team deathmatch.

If played as a starter game, it's generally on a smaller area to help airsoft players new to the site get accustomed to the layout before more complicated games are played.

Hostage rescue is all about rescuing hostages from the opposite team.

The rescuers will likely have to breach a building or room to recover the hostages.

You'll often find guards will protect the hostage, so keep your wits about you as you're clearing rooms.

The usual game rules are that one team is the "Hostage Team," and they have to protect the hostage while the rescue team has to save the hostage.

This is usually done by eliminating the enemy team to reduce their pool of respawns until they cannot come back into the game.

Sometimes the hostage team will have infinite respawns to make the game more challenging or have an objective to complete simultaneously.

The reverse of hostage rescue, this classic airsoft game is about taking something to the enemy base instead of recovering it. It could be a landmine or flashbang placed on top of a prominent object in the open.

Teams are usually split into two sub-teams; the defender and planter teams. The planter team will have the bomb and try to get it to the enemy base, while the defenders will prevent the opposing team from doing the same.

Plant The Bomn can be played with limited or unlimited respawns and other restrictions, such as medic rules to encourage more tactical gameplay.

Sometimes a hostage game or bomb-planting challenge can cause both teams to fight over a small part of the game field.

Find and Recover games can spread the action across the field and have teams fighting over multiple objectives that need to be found and moved to a secure location.

Find and Recover can be played with one team attacking and one defending. Or both teams rush to grab and defend as many objectives as possible before the enemy team gets to them.

That's right; we saved the most common game type for the end. Everyone knows what a team deathmatch is, and beginner and experienced players love it.

The rules are simple; eliminate enemy players to score points.

There are two main types of team death matches:

Each version has its mix of challenges to contend with.

TDMs work well for smaller and larger teams and encourage competitive gameplay on the playing field without the need for complicated objectives.

It's a tough choice to pick our favorite game types, but if you want to get right into the action and get the blood pumping, there is no better choice than a classic game of Team Deathmatch.

There are usually no restrictions on weapon types.

Whatever your choice, it's clear there are airsoft game types for every airsoft player out there. If you're interested in military simulation games, it may be worth looking into a Milsim event.