Airsoft vs. Paintball: The Showdown 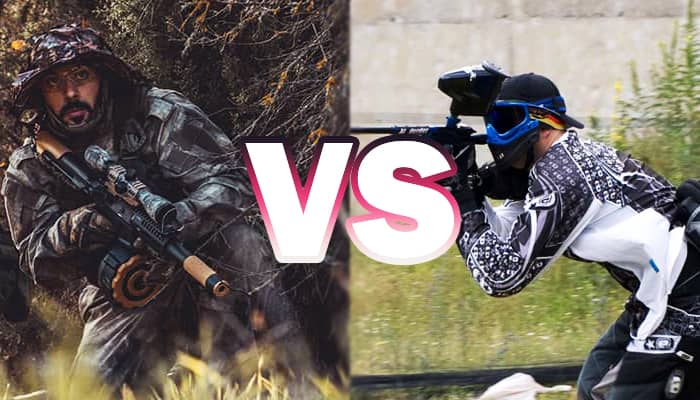 It can be hard to decide what sport is the right fit for you.

Do you want something that is action-packed and full of adrenaline? Or do you prefer a slower-paced sport that is still challenging?

In this article, we'll compare airsoft and paintball – two of the most popular outdoor sports in the UK.

We will look at things like costs, pain levels, and how active each sport is.

So, let's get into it: airsoft vs paintball, which is better?

Airsoft vs paintball: the basic differences

The main difference between airsoft and paintball is the type of games being played, the weapons being used and, the ammunition

Airsoft is a combat simulation game focused on teamwork and objectives. Airsoft creates a sense of realism and appeals to people who enjoy working as a unit to defeat the opposing team.

In paintball, players try to hit each other with paintball markers. Paintball games are faster-paced and are focused on eliminating opponents as quickly as possible.

Paintball vs airsoft: which is more beginner-friendly?

Both airsoft and paintball have their pros and cons for beginner players. People often ask questions like 'which is more fun?' or 'how many times am I going to be shot?' Below we've highlighted the reasons benefits and disadvantages of paintball and airsoft for beginners.

Airsoft is a great sport for beginners because airsoft guns are typically less powerful than paintball guns.

Because airsoft games revolve around a key objective (or set of objectives) it creates the need for people to communicate. You'll often find that experienced airsoft players are keen to get newer players involved throughout the day.

You'll also find that airsoft can hurt less than paintball. Which, for a beginner airsoft player, can be a huge deterrent (or incentive) to play the sport.

The realism of airsoft can sometimes be an issue for beginners.

If you've never played airsoft before, it can be hard to learn how things work. Things like how big the airsoft field is, how the game structures work and, even getting used to an airsoft gun.

Unfortunately from the outside looking in, an airsoft game can appear to be too serious. With grown men using what appear to be real guns dressed head-to-toe in military-style clothing.

And finally, playing airsoft can be quite draining physically. Working your way through buildings, climbing in and out of windows, carrying all of your equipment; it gets tiring!

Playing paintball can be a lot of fun. It's less objective-based which makes it easy for new players to learn the rules very quickly.

You'll also find that the higher fire rate of a paintball gun attracts a bigger audience of people.

Being able to run around shooting your friends with paintball markers sounds like a lot of fun. It's also the reason why paintball is generally more well-known than airsoft is.

Because paintball guns shoot at a much higher rate, it also means they can hurt a lot more than airsoft.

The fast-paced action and general lack of cover normally mean getting hit a lot. Which, depending on your appetite for pain, can be a negative to any paintball game.

Finally, just like airsoft, paintball can take a toll on you physically. Paintball guns are a lot lighter than airsoft rifles, but, it doesn't make running around being shot with paintball markers any easier.

Which is more painful airsoft vs paintball? 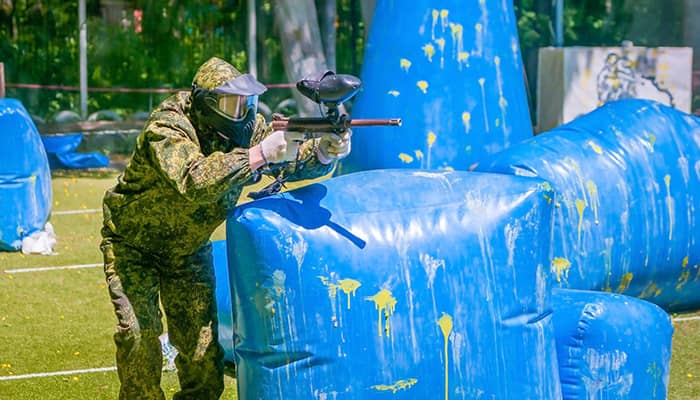 Based on the fire rate of paintball guns and the ammunition used, we feel confident in saying that paintball is likely to hurt more than airsoft.

But, don't be fooled.

Being shot at point-blank range with airsoft BBs is no walk in the park either. The risk of injury is still similar. Most airsoft fields are derelict or abandoned buildings with unstable flooring and debris everywhere.

Whilst paintball fields are normally in the woods where your biggest obstacle (or threat) is slipping in mud or falling down a hill.

So, if we'll say this: you're likely to be hurt more playing paintball than you are playing airsoft. That's because:

Which is safer airsoft or paintball?

Airsoft and paintball are both relatively safe sports.

However, airsoft has had more reported injuries than paintball has over the years. This varies between the UK and US.

The data for airsoft and paintball-related injuries is a little outdated so, statistically speaking, we can't give you a solid up-to-date answer.

But, in the interest of helping your choose airsoft or paintball, here are the most common reported injuries for paintball:

As of today, there isn't enough data on airsoft injuries in the UK to confidently compare the two sports.

Which sport is more expensive to play? 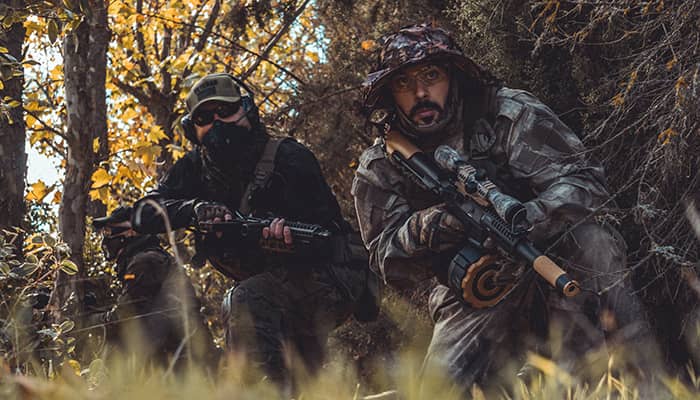 The difference in costs between paintball and airsoft depends on the level of player you are. If you're a regular player, you can expect to invest more into your guns, equipment, and gamedays.

To make things easier, we've broken down the price ranges of both sports below.

Airsoft guns can range from £100 up to £1,000 (with upgrades). The main consideration is that there are a variety of guns to choose from. Sniper rifles, pistols, shotguns, assault rifles.

In addition to that, you can almost continue to upgrade most airsoft guns to make them more realistic and with better performance.

The same applies to a paintball gun. You can pick up a basic starter kit for £100 from most retailers in the UK (Argos even sells them). Or, if you're a more serious paintballer, you can expect to spend up to £1,500.

In that sense, we'd say prices are even for purchasing your first gun.

Paintball games are expected to cost anywhere between £45 and £49 per person. This price covers a full day of paintballing (roughly 6 hours), up to 500 paintballs and, equipment rental.

Airsoft is slightly more expensive. A day of airsoft can cost anywhere from £40 and £50 per person. This includes the cost of 3,000 BBs, face protection and, camouflaged clothing.

So, for beginner players, both airsoft and paintball cost roughly the same.

However, the real difference in price is felt by the most experience airsoft and paintball player (thanks for that).

A bag or bottle of airsoft BBs can range from £12 to £18. This depends on the grade and quality of the airsoft BB you buy.

For example, if you're competing in airsoft tournaments, there are 'luxury' brands that claim to be more accurate and have a greater range.

We say: they're plastic pellets. Don't worry too much about spending £20 on 3,000 BBs that you're never getting back.

Paintball pellets are more expensive. They can cost between £10 and £12 for 500 pellets. And, for professional-grade tournament paint, paintballs can cost up to £80 for around 2,000 paintball markers.

Airsoft relies on realism. But, that doesn't mean to say a pair of jeans, a hoody, and a pair of boots isn't enough to get started.

You can spend as little as £40-£50 on airsoft clothing. And that would be enough to get you involved in the sport. If you want to simulate actual combat and buy the 'Gucci' gear of the airsoft world, you're likely going to spend hundreds of your hard-earned pounds.

Paintball, on the other hand, is a lot cheaper.

Despite paintballs hurting a lot more, for some reason, the people who play paintball are insane.

They run around with a paintball mask, gloves and, a jersey. It can cost up to £100 for everything included. And, no matter how serious you get into the sport, the costs for clothing don't really increase that much.

We'd say, for beginners, airsoft gear can be cheaper. But, in the long run, airsoft can be far more expensive.

We're not going to give you the nitty-gritty details of how people can kit out their loadout.

To save you time, remember, airsoft is based on a realistic warfare experience. To experience that level of realistic combat, the equipment needs to look and feel real.

We're pretty confident that airsoft is a lot more expensive than paintball when it comes to equipment.

Put it this way, everyone on the First Airsoft team has likely spent over £1,000 on replica firearms, plate carriers, shooter belts, eye protection, slings; the list goes on. 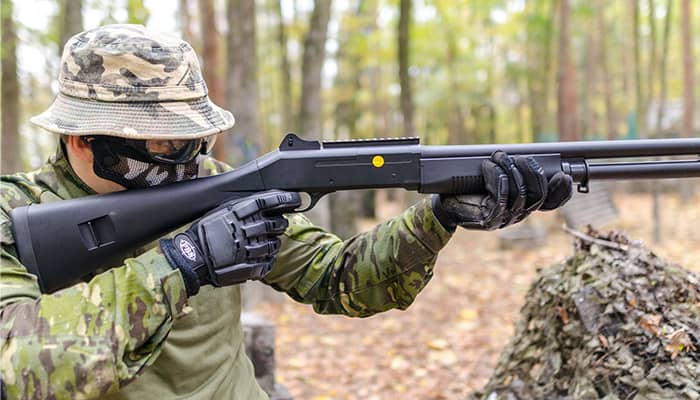 Airsoft is a sport based on an honor system. Because airsoft requires a player to yell 'HIT!' when a BB hits them, it comes down to the player.

We've already spoken about the key differences in the types of games being played at any local field. So, we won't cover that again here.

Whereas, with paintball, there's a significant difference in being able to spot if somebody is cheating. Paintballs hitting your clothing and exploding are pretty hard to hide.

Although I'm sure people try it.

For beginners, it's going to be easier to confidently eliminate opponents playing paintball.

We'd say that both sports are pretty even in a lot of areas.

From costs and barriers to entry, both sports are very similar. The argument of airsoft vs paintball boils down to two things (in our opinion):

For beginner players, we suggest considering how involved you'd like to be. Because the costs are so similar, this shouldn't influence you either way.

Paintball is more widely known and accepted as something to do for a birthday or a stag do. Whereas airsoft (from the outside) looks to be more 'exclusive'.

We hope that this article dispels the notion that airsoft isn't for everyone; because it is. Airsoft players across the UK would echo our opinion here.