What Is The Best Airsoft Brand? 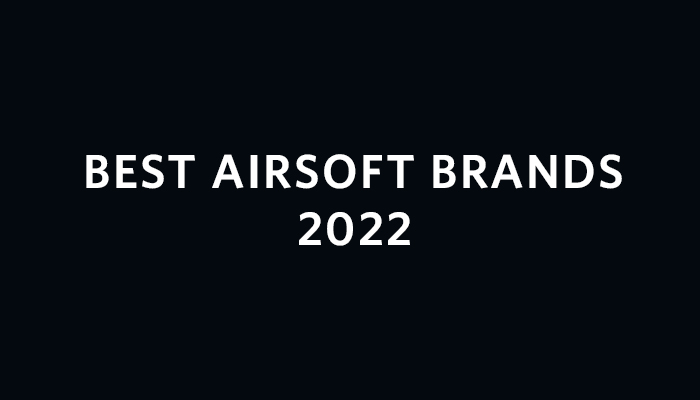 A question echoed throughout the airsoft world, yet airsofters will always have different views on what the answer should be.

Some players want realism, whilst others want a budget AEG to shoot their friends with.

And with such a huge selection of airsoft brands to choose from, it can sometimes be tricky to make the right decision.

In this article, we've broken down our roundup into different sections. One brand might not be the best for all situations, playstyles, and budgets.

There's no getting around it - airsoft can be an expensive sport to play.

Airsoft guns all tend to work on the same principle.

So, although there is a wide range of brands to choose from if you're just starting, they’ll all perform nearly the same.

Budget rifles will tend to be missing some features you find on high-end models, such as electric blowback and metal bodies, but an entry-level gun will be great for beginner players to use when going to their local airsoft field.

A relatively new company compared to some others in this list but one to watch.

Specna Arms have focused almost exclusively on M4 and AR-15 replicas, which helps keep their costs down as they only manufacture a single type of rifle.

Their core range is the best value product they offer and is fully compatible with all M4 (Ver2 Gearbox) upgrades, meaning you can buy one of their airsoft replicas as a first rifle and upgrade it in the future to remain competitive.

Their focus on only one type of replica to ensure great quality.

Previously seen as a poor choice in the airsoft industry, Lancer Tactical is an airsoft brand that has become focused on rebuilding its reputation and proving that it can offer quality products at affordable prices.

They offer a wide range of products, including assault rifles, pistols, and machine guns.

Their assault rifles are competitively priced, and the newer Gen3 versions are a huge step forward.

Although these AEGs are priced relatively high if you are a beginner.

Lancer Tactical offers different versions of their beginner rifles, including plastic/polymer and metal bodies which are ideal for entry-level players.

They need to earn trust back still, so their guns are of great value to encourage buyers.

Unlike the other budget airsoft brands, G&G Armament was not originally an airsoft manufacturer.

Instead, they used to be a dealer and specialised in selling airsoft guns and tactical gear.

In the early 2000's G&G began selling their airsoft products and have quickly established a reputation for selling quality airsoft rifles at an affordable price.

G&G also sells a wide range of models, from the standard M4 variants to smaller submachine guns and WW2 replicas.

Whilst some of the other replica variants are more expensive, their Combat Machine line has quickly gained a reputation for being solid performers out of the box with good reliability.

G&G has been offering products with premium features at intermediate prices which makes them great value, if a little more expensive than the other two brands.

After playing a few games, most airsoft players become heavily involved in tweaking their weapons for maximum performance.

The aftermarket scene for airsoft is massive.

Airsoft shops sell upgrades that range from a tiny piece of rubber to improving the hop-up. Or complete conversion kits that change the look and feel of a rifle.

If you're thinking of upgrading your airsoft gear after a few games, then it's worth checking out an airsoft gun manufacturer off of the list below.

I Chih Shivan, or ICS for short is an airsoft brand from Taiwan.

Like other airsoft brands, they offer metal or plastic bodied versions of a wide range of real steel replicas; they even sell a grenade launcher!

ICS makes it into our best airsoft brands for upgrades due to their unique split gearboxes.

These gearboxes allow advanced players to quickly change their guns for different purposes, such as swapping from an assault rifle to a DMR by simply changing the upper gearbox for a higher-powered setup.

These split gearboxes make it easy to change your setup quickly and allow beginner players to learn about the internals of an airsoft gun.

However, it does mean they have some proprietary parts.

ICS guns are incompatible with many aftermarket external/cosmetic parts due to the different dimensions, so it's worth considering this when it comes to upgrading time.

ICS doesn’t follow the crowd - their replicas use some proprietary parts but they’re not clones of any other brand.

VFC produces fantastic quality externals on their airsoft guns, albeit at a higher price range than most.

VFC makes this list as being an excellent platform for upgrading.

VFC is widely seen to have the best externals in terms of quality and accuracy when compared with real steel guns, the internals on their airsoft rifles are not always up to the same standard.

Although the internals of a VFC replica may not be the best quality, they use standardised parts compatible with a wide selection of aftermarket manufacturers.

This allows experienced players to fine-tune their build into a primary weapon that complements their airsoft game perfectly.

Their newer Avalon series of rifles are meant to be better for the player that wants out-of-the-box performance, but these rifles lack trademarks and are not based on a real firearm. Just like the licensed products, they should still be bought to upgrade the internals.

Excellent attention to detail on the externals makes these very pretty guns to look at.

ASG is a European company based in Denmark.

Their vast array of airsoft products and exclusive licenses mean that they are the only option for specific Airsoft replicas.

But their quality control means that this isn't a disadvantage.

Whilst some of their more popular models, like the Scorpion Evo, do not use standard gearboxes and need some custom parts, they are hugely popular, and Evo users still have access to thousands of aftermarket parts.

Being based in Europe means their warranties are better than other brands,

Airsoft players are diverse, and the industry caters to all sorts of tastes.

If you're a player that wants an airsoft gun that is as close to real weapons as possible, then the brands below should be your starting point.

Tokyo Marui was the first to create an electrically powered airsoft gun and invented the hop-up.

They are often more expensive than their competitors but are widely regarded as having outstanding performance out the box.

Their gas-powered guns feature recoil via a blowback mechanism and have more accurate magazine capacities than their electric counterparts.

Whilst gas-powered guns are more realistic; they aren't the best choice for entry-level players.

To counter this, Tokyo Marui invented the Recoil Shock range of electric blowback rifles, a system that would simulate recoil and the bolt stop feature found on most gas guns, but without the additional maintenance requirements to go with it.

If you're after a reliable recoil experience without switching to gas, then this is for you.

The ‘magic’ dust that means a Tokyo Marui may only shoot 280fps out the box but still outrange most brands on this list.

Whereas the other two on this list are known for their battery-operated replicas, the reputation that WE have built up is firmly around its gas-powered range.

WE pistols are abundantly available and a solid choice for airsoft players regardless of experience.

Their gas-powered rifles are less popular due to previous issues with quality control, but the newer open bolt system is much more reliable than the previously closed bolt system.

Like electric rifles, you can make many upgrades to WE gas rifles.

Although, unlike their electric counterparts, they are much more temperature-dependent in performance.

So they are best saved for experienced airsoft players.

Can’t get much more realistic without going to a real shooting range.

Like some other brands in these lists already, they only focused on one type of gun; this time, it's AKs, Type 97s and SVD sniper rifles.

While they offer no recoil or bolt stop, they make our list because their AK series was created from actual AK bodies.

Real Sword would take an AK body from the production line of real firearms manufacturers and retrofit an airsoft gearbox into the body.

It's impossible to get a replica firearm with the same detail level purely because the body isn't a replica.

Real AK bodies! You cannot get a more realistic AK in airsoft.