How Do Airsoft Grenades Work? 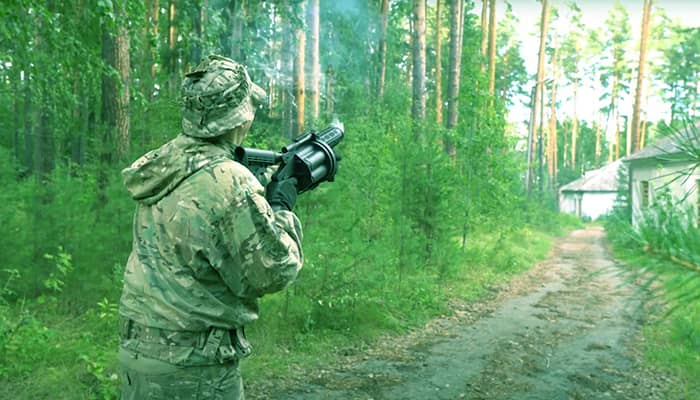 Airsoft grenades can fundamentally change your playstyle during airsoft games.

You’ll be able to clear rooms more effectively, take down multiple enemy players at once or, use projectile grenades for ranged attacks.

Airsoft grenades add to the realism of airsoft.

But, how do airsoft grenades work? Are they safe for the everyday airsoft player?

We’ll aim to answer that (and more) in the article below.

Which type of grenade is right?

There are four common types of airsoft grenades found throughout airsoft fields in the UK.

These different types of grenades are:

Pyrotechnic grenades are often single-use. Each grenade is packed with a small internal explosive that ignites when you strike the top of the grenade.

The striking mechanism (depending on the grenade) will be similar to that of a matchbox.

In fact, striking a grenade is much like striking a match. Once you connect the striking mechanism with the fuse, the explosive will ignite within 5 seconds.

You'll hear a loud bang without any BBs being dispersed. Very much a blank firing grenade.

Note: Airsoft grenades can cause serious injury. If you hold onto a grenade for too long once you’ve ignited the fuse, it can result in burns to your skin. Please read the instructions before you use a grenade in-game.

The alternative to the traditional strike-a-match grenade is the newer ring-pull method.

Just like a real grenade, there's a ring-pull fitted to the top.

To ignite the fuse, you simply pull the ring out of the grenade; causing the internal explosives to trigger.

Again, at this point, you’ll have a set amount of time to get rid of your pyro.

Flashbang grenades are great for disorientating your enemy.

A surprise flashbang will temporarily confuse your opponent and, due to the surprisingly loud sound, likely deafen them slightly, too.

Flashbang grenades are powered by CO2 propane or green gas. They're activated by pulling the firing pin out of the safety mechanism.

Once the flashbangs collide with a hard surface, they'll explode. But, unlike a single-use pyrotechnic grenade, this explosion doesn't destroy the body.

Great for all types of events; especially those filled with campers.

Smoke grenades are great for concealing movement, pushing objectives and, signaling the location of the enemy team.

They're not considered weapons since the vast majority of smoke grenades are non-explosive.

You can buy them in a variety of colors and they're relatively inexpensive.

You can pick one up for £7 or £8 from most airsoft retailers.

Tag rounds are projectile gas grenades that can be fired from airsoft rifles.

Gas grenades are either audible or, projectiles due to the pressurised mechanism that gas grenades feature.

Most tag rounds require an outer grenade shell (usually 40mm) which is powered by either gas or CO2. You then load them into the under-barrel attachment of your rifle or, a grenade launcher of your choice!

You can fire smoke grenades and frag grenades for maximum awesomeness.

The range and accuracy of tag rounds depend on the gun you're using. You can launch dummy grenades for up to 130 meters (great for woodland environments).

How old do you have to be to buy airsoft grenades?

To buy an airsoft grenade, you have to be 18 or over. The same laws and regulations apply to grenades as they do to airsoft guns.

Grenades can be used incorrectly if they end up in the wrong hands and thus, retailers avoid selling them to minors.

Yes, you can purchase reusable grenades.

We personally use the Tectonic Innovations Quake grenades. They come in a range of colours and you can even customise the colour combination.

Reusable grenades come with a base that can carry up to 4 or 8 'bangs'. They're fantastic for moving through buildings and quickly clearing rooms.

The primers used in reusable grenades are 209 shotshells. They're activated by using a small pin that pierces the top of the primer upon impact.

Note: If you're going to use grenades indoors, be prepared for the noise it makes. Even though they're a blank grenade, the sound and slight spark make them very realistic. We recommend buying ear protection to avoid damaging your hearing.

Does an airsoft grenade hurt?

The FPS of the grenade will be determined by which gas or CO2 is being used. We mention the Tornado Grenade below which shoots out 200 BBs at roughly 240FPS.

If that comes into a 10x10 room with 2 airsoft players trapped, you can bet it's going to leave a mark and cause pain and injury.

Do airsoft grenades have BBs?

Yes, some airsoft grenades carry BBs which eject from the grenade upon impact.

For example, the famous Tornado Grenade made by Airsoft Innovations. These little beauties are powered like CO2 grenades and fire up to 200 BBs from the grenade body!

You can imagine the level of chaos this causes in the game.

The only issue is, some airsoft sites don't allow them due be used. Because of the volume of BBs that the Tornado fires, it can sometimes be more trouble than it's worth.

If you're serious about realism and improving your gameplay, a grenade will become an invaluable tool in helping you achieve that.

With a wide variety of prices and types to choose from; there's something out there for everyone to enjoy.

Whether that's a single-use low-powered grenade you can buy on-site.

Or the more serious option like the Tectonic Quake which will scare your enemy senseless.

Everyone on the team at First Airsoft has one and we can say (with confidence) we don't know how we survived without them in the past.

Let us know in the comments if you're using them and, if so, what'd you love about it!