What Is A Hop Up In Airsoft? 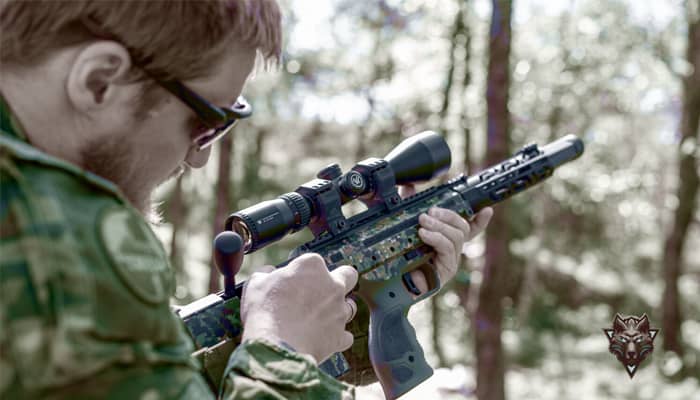 You may think that airsoft guns have always included a hop-up and whilst it's extremely difficult to find an airsoft gun on sale today without a hop-up chamber this wasn't always the case.

The hop-up system is an integral part of the airsoft gun that is used to boost its effective range, allowing the user to engage a target that is further away.

It's fair to say that the arrival of the hop-up unit changed the game of airsoft forever.

How does a hop up work?

A hop-up unit works by making the BB pellet spin backwards to increase the distance it can travel. The reason this increases the effective range of the pellet is due to something called the 'Magnus Effect'.

This is a phenomenon whereby the force that the pellet imparts on the air around it causes a change in air pressure and generates a lifting force underneath the pellet, thus increasing its range and flattening its trajectory.

There are several key parts to a hop-up unit that are used to create this effect.

The main part of the unit is called the hop-up chamber. Once the pellet is inside the chamber it is pushed forwards by a burst of air when the gun is cycled. As it moves forward it comes into contact with the hop-up rubber which protrudes into the chamber from above.

When the pellet hits the hop-up rubber it increases the friction on the topside, causing the bottom of the pellet to move faster than the top which begins the rotation to cause backspin.

What is inside a hop-up unit?

The hop-up unit is made up of several components and nearly all of them have aftermarket versions that you can purchase to fine-tune your AEG, GBB, or spring-powered gun to your liking. There are different types of hop-up units based on the type or brand of the gun being used but they all use the same basic principle.

The core parts of a hop-up unit are:

The chamber is the main part of the hop-up unit that keeps everything else in place.

This holds the hop-up arm, rubber and nub in position and is also used to allow you to adjust the other parts to achieve a hop setting of your choosing.

Most hop-up chambers that you find in airsoft guns off the shelf will be plastic, although there are companies that will sell you chambers made from different materials such as CNC metal.

You can also buy some chambers that have tracer units built-in although these tend to be more advanced and require more work to fit and wire in.

The hop-up arm fits along the top of the chamber and is used as part of the hop-up adjustment to increase the pressure pushing down on the hop-up rubber.

Whilst most arms are made of plastic there are also a growing number of aluminium hop arms available to buy to further improve the stability and pressure applied.

At the end of the hop-up arm is a concave cutout where the hop-up nub sits. This is a small piece of rubber used to apply an even amount of pressure across the hop-up rubber to improve the stability of the pellet and ensure the pellet rotation is the right way up.

There are a variety of types of nub styles that allow players to customise how their hop-up units perform, from solid nubs to H-shaped nubs and even hollow nubs.

The last piece of the unit is the hop-up rubber.

Sometimes also known as a 'bucking', this is a rubber sleeve that fits over the inner barrel and sits between the barrel and the hop-up chamber. Most rubbers have a ridge in them that is designed to sit in the cutout window on the inner barrel.

This ridge is the part of the unit that makes contact with the BBs' surface and causes the rotation.

As with the other parts of a hop-up unit, there are a wide variety of styles that can be used including different grades of rubber to change how firm or soft they are. This has the effect of changing how consistent each shot is as well as the longevity of the rubber before it is worn out and needs to be replaced.

Are all hop-up units the same?

Since the invention of the hop-up unit, numerous brands have tried to come up with improvements to give them the edge when it comes to accuracy and range.

Whilst most manufacturers use the same standard components (especially in electric airsoft rifles) there are a wide variety of aftermarket parts available for upgrades. Most users aim to increase range as a result of any modifications they may make there are also upgrades that can be completed to increase the accuracy and consistency of each BB shot from the rifle.

Who invented the hop-up?

The hop-up unit was invented by Tokyo Marui and was first used in the FAMAS F1 assault rifle replica that was released in 1991.

Before this most AEG rifles had a maximum range of 30-40 feet and pistols were even less. Tokyo Marui worked out that adding a backspin to the BB pellet would increase the distance that the pellet would travel.

Once this was released it didn't take long for competitors to being to copy this design. Although it has been around for over 30 years and the basic principle of the hop-up unit hasn't changed it is still being iterated and improved upon to eke out the best performance possible to get the edge on the game field.

The future of the hop-up

As testing and development continue and the popularity of airsoft as a sport increases there have been numerous products designed to improve upon the original design.

Innovations like the 'R-hop' have improved how the BB makes contact with the hop rubber by adding a custom fit friction pad that mimics the curvature of the barrel of the gun with a concave contact surface, providing incredible accuracy with heavier weight BB pellets.

Whilst these used to be reserved for advanced players with finely-tuned guns such as bolt action sniper rifles that possess huge range they are becoming more common with general airsoft players as they become more mainstream and readily available.

Some users are also playing around with modifications to their barrels such as modifying the barrel cuts in the inner barrel to either widen or extend the space available for friction patches to allow a greater amount of time for the BB to be in contact with the patch, thus resulting in increased range.

Whilst it's clear there are still improvements to be made, the arrival of the hop-up unit changed airsoft games forever and has inspired a multitude of airsoft products; from both well-known brands and individual engineers that continue to push the limits of airsoft performance