What Is A Mosfet In Airsoft? 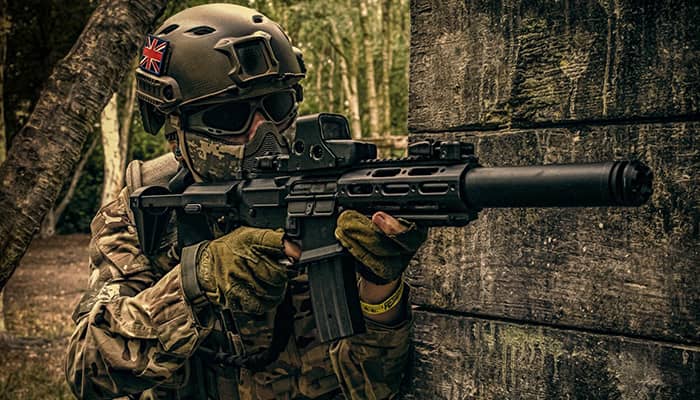 What Is A MOSFET In Airsoft?

If you're new to airsoft (or not) and have unanswered questions about what a MOSFET is in airsoft, then we've got you covered.

In this guide, we'll aim to answer all of your questions about MOSFETs: what they are, how you can use them, the benefits and, the costs.

Understanding what a MOSFET is

A MOSFET (Metal Oxide Semiconductor Field Effect Transistor) is a type of transistor that can be used as an amplifier or a switch. When we talk about MOSFETs in airsoft, we mean a switch. A way of diverting electrical currents away from the trigger's metal contacts to prevent wear over time.

In really simple terms: a MOSFET is a form of protection for your AEG's electrical circuits and internals. It helps reduce the damage that pulling your trigger has on your weapon.

Plain MOSFETs will have one function: to protect the traditional trigger contacts built into your gun. They are budget-friendly (between £30-£35) but come with no customisable controls for your AEG.

Plug and play MOSFETs come with risk. The main purpose of a MOSFET is to act as a switch for your gun's electrical current. With plug and play MOSFETS there's the question of 'is this protecting my trigger contacts if no wiring has changed?'

The battery's current is still going through your trigger contacts with this option and so, we wouldn't recommend this type of MOSFET for protection.

If you're purely after three-round burst modes, this might be a cheaper (between £35-£50) way to upgrade your AEG.

The most expensive type of MOSFET available on the market is the drop-in trigger boards. This option is expensive (upward of £150) and completely replaces the moving trigger contacts with sensors.

If you want to adjust the trigger feel, a drop-in trigger board will be the only way to achieve this. The trigger will feel much lighter with shorter pulls compared to traditional trigger contacts.

For the tech lovers, you'll also be able to change the feel of your trigger via Bluetooth. Which, even though it comes with a price, is an awesome upgrade. Especially for longer-term players and more experienced players.

What are the benefits of MOSFETs?

By adding a MOSFET to your AEG it can lead to a small increase in trigger response and full-auto rate of fire (ROF). The reason why (without being too technical) is because the MOSFET system has a lower electrical resistance. Materials with low resistivity allow the movement of electric charge more freely throughout the electrical circuit of your gun.

You can configure your airsoft gun to work in different operating modes. Depending on where you play and your play style. For example the famous burst mode (explained below) or being able to completely turn off full-auto mode. The ability to access advanced fire modes on your weapon can give you a small advantage over other airsoft players.

Some MOSFET systems allow for 3-Rd burst firing mode. This is not only an amazing feature of a MOSFET but it's extremely useful playing airsoft. Why? Well, apart from being awesome, it allows for three BBs to be fired at a target. Almost guaranteeing a hit on the enemy player.

To activate this in your AEG (depending on the type of MOSFET you have), you simply hold the trigger for a certain amount of time in single-shot mode. Once you change your fire selector to full-auto, your 3-rd burst mode should be on.

Pre-cocking is when you intentionally cause a delay in your airsoft gun's cut-off mechanism. This means when you let off of your trigger, the gun continues to cycle for a preset amount of time. Allowing for the next shot (or trigger pull) to be instant.

This pre-cocking function can help reduce movement in your gears and motors. The less movement, the more reliability. Because your AEG's spring is already pre-cocked, it means your gun doesn't have to go through the entire cycle.

A MOSFET can help equalise wear in your gearbox but it’s worth considering any drawbacks it may have. The most common one is that when using a pre-cock feature the spring is left compressed. This can over time reduce your FPS so it’s worth bearing in mind.

More advanced MOSFETs can also change the way they stop your motor spinning by utilising a current to stop the motor instead of letting the motor spin. Because they use an electrical current for this they can empty your battery faster and also cause additional wear on the motor. For some users, this is an acceptable tradeoff for performance, but for those using a MOSFET to protect their AEG, it’s not worth it.

Impact to the life of mechanical parts such as the gears and cylinders are minimal as they are rated to take the level of mechanical strain already present in the AEG anyway.

We can only recommend brands that we've used in our guns. In our experience, the best brands are both affordable and suitable for all skill levels.

How much does a MOSFET cost?

Airsoft MOSFETs products can range from £35 to £170 in price*. Depending on the programmable options, additional functions, and installation costs. However, most airsoft guns come with a basic MOSFET installed as standard.

For example, Ryan from First Airsoft uses a G&G ARP 556 which comes with a MOSFET unit. The entire cost of the gun was £250 and it comes with a three-round burst mode.

Of course, you can upgrade your AEGs with more powerful systems. But for basic protection against potential damage to your trigger contacts, it does a great job.

If you're just starting out, we'd recommend trying to find a gun with a MOSFET already installed. It'll reduce your upfront costs and help you get familiar with how the system works before spending more money.

Do you need a MOSFET in Airsoft?

If you're running a 7.4v NiMH or Lipo battery, a MOSFET system shouldn't be needed. If you're using an 11.1v lipo, this is where trigger contact wear becomes an issue.

When you start to use high-powered batteries, the electrical current is great enough to cause arcing between the trigger contacts. Arcing means when electricity jumps from one connection to another. It causes a small flash and is often why cables or wires burn out.

This is where having a MOSFET will be required to preserve the performance of your gun over time.

Here are a few things to keep in mind:

A MOSFET unit can be an incredible upgrade for all levels of airsoft players. If you're just starting out, the basic protection and voltage protection it offers can help sustain your weapon for longer.

If you're a more serious player, upgrading your AEG with a drop-in trigger board with optical sensors might be the reason why you're able to outplay the enemy team. With wireless management (Bluetooth) it could almost act as a party trick, too.

Should you get one? Yes, we think you should. The benefits completely outweigh the costs. MOSFETs get the First Airsoft seal of approval.