What Is Black Gas In Airsoft? 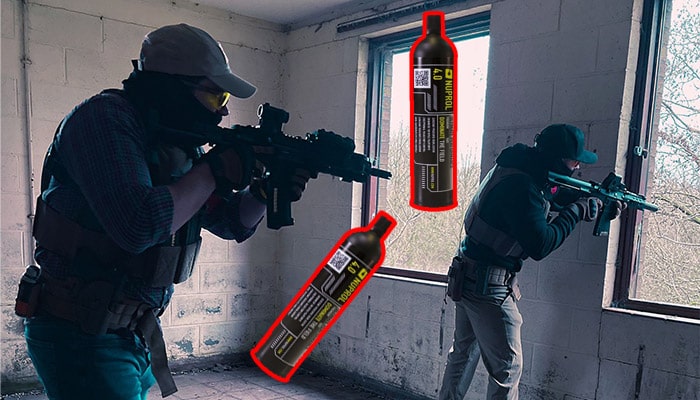 Gas. You'll hear the term used pretty loosely in airsoft. It's one of the holy trinity of power sources used to sling BBs across the field. Whilst HPA and Electric guns have their uses, gas blowback weapons are for those airsoft players who want the best in realism.

If you've settled on a gas gun you might have realised by now that there are a LOT of different types of gas out there. We've already covered green gas in a separate post, so in this one I'll talk about what Black Gas is.

Is Black Gas The Same As Green Gas?

Black gas has a similar chemical makeup to green gasses, but is stored with an increase in pressure compared to other gases. Both gases use concentrated propane as their main propellant with a small amount of silicone oil added. This helps to lubricate the internals of your airsoft weapons and fights corrosion on metal parts that wear over time.

Black gases will have a reduced volume of propane compared to green gas which they compensate by adding in ethane. This is another type of gas which allows for a decent pressure increase over the typical propane mixtures.

If you were to compare black gas and green gas on the same day in the same conditions you would find your airsoft weapon had a greater FPS/Joules reading and a harder kick due to this boost in pressure.

Yes! Because black gas has a much higher pressure than other propane-based gases it is very possible that it could damage your airsoft rifle or pistol.

The most common issue is damage to pistols, especially plastic slide blowback pistols as the materials they are made from are not built to withstand the increase in weapon recoil.

Most airsoft players will stay away from black gas during the warmer temperatures in the year due to this factor.

It definitely does. The speed at which gas expands reduces in line with drops in temperature, so the colder it gets the less power you get from your gas. Whilst Black Gas will almost always be over UK site limits in milder weather it is the best performance gas for the coldest temperatures in the year.

If you are an airsoft player that loves to play all year round then black grade propane gas should be one of your first choices if you are concerned about temperature efficiency in single digit temperatures.

This stable gas pressure in cold winter months makes black gas an ideal gas for rifles when you need to remain competitive regardless of how snowy it may be outside.

Which Black Gas Product Is Best?

With a range of products available from different brands there's no definitive winner.

We've compiled a list of products, but all of these are high power gases that should give the same performance regardless of which you pick.

Most of the First Airsoft team only use gas for their airsoft pistols and don't run a dedicated gas primary. Because of this it's very rare that we use black gas as the pistols are only ever used as a backup for CQB choice.

Whilst black gas is a formidable propellant that can be used in any airsoft weapon from assault rifles to automatic pistols, it's use case is quite restricted as it can only be used in the UK during winter.

If you happen to play frequently in winter or live in a cold climate then black gas is possibly your only choice, but for milder weather it's largely unusable purely for the fact it is too powerful.

It's for this reason alone that we prefer to stick with green gas.