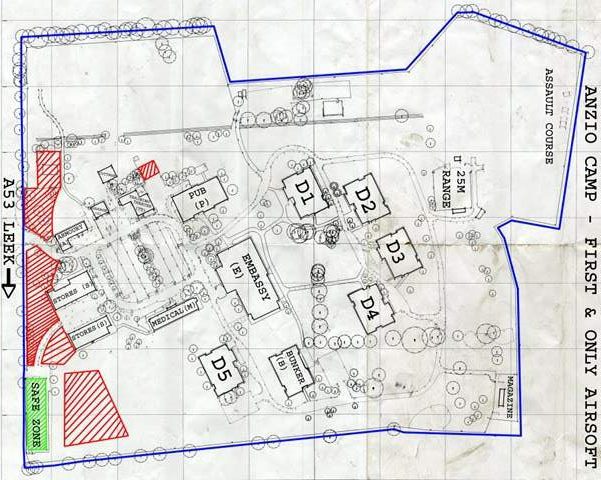 Anzio camp is a huge disused M.O.D. barracks and training facility encompassing a massive amount of buildings. This site is perfect for everyone for all types of gameplay (i.e., woodland and urban). The site’s buildings range from small stores to two-story accommodation blocks. Areas of the site include road networks, mixed woodland, an assault course, and a firing range. All areas of the site are in play and accessible providing true FIBUA combat for FAO’s scenario-based game days. Expect to be fighting in built-up areas, varied open spaces, and true close quarter battle. Anzio camp also has access to 4×4 vehicles on this site providing you with reinforcements or evac if you are pinned down.

If you don't turn up early enough, you may not get indoor parking.
Bring tables and chairs for in-between games and lunchtime.

(Please note, we are in no way associated with Anzio Camp or First and Only Airsoft. Each review we leave our website is a genuine and honest opinion of our experience.)

It's roughly 115 miles (2.5 hours) from our local airsoft site but, we decided to give it a try. We'd seen and heard good things about Anzio on YouTube and Facebook groups.

We thought, what the heck, must be worth the trip.

I'll start with the positives (there aren't many).

That's, unfortunately, about it for the positives.

The negatives (which I'll dig into a little bit more so there's a fair explanation).

The marshaling was some of the worst I'd seen at an airsoft field to date.

The marshalls were nice enough people but presented themselves as such an overbearing authority it was offputting. The safety briefing lasted roughly 20 minutes and, during this time, we were spoken to like children.

Their approach to delivering instructions was poor and their leniency on the field was next to none.

I (and the team) appreciate safety. We want people to go home without being injured. But there's being safe and then ruining the point of airsoft; which is to have fun.

For instance, reusable grenades aren't allowed to be used to clear stairways. A little weird but, forgivable. The next grenade rule is something I'm still confused about.

The only possible way that grenade is hurting somebody is if a) they pick it up or b) they're wearing flip flops.

Nonetheless, that was the rule.

Within the first 10 minutes of gameplay commencing, two things happened:

The gentleman who laced us all at point-blank range of full-auto was shouted at but ultimately allowed to continue.

Dan, on the other hand, had his grenade taken away from him until the end of the day.

A grenade that rolled more than the allowed distance once it hit the floor should've been reconsidered.

Next, we have the game objectives and hit taking.

The site is quite big. If you've ever been, you'll know that running to and from a spawn point can end up being a small marathon over 6 hours.

This is what made some of the gameplay completely ridiculous.

Multiple objectives, spread over a huge site, never work. People group up in areas that prevent the game from moving smoothly.

Being allowed to respawn in the building you've just been shot in also makes no sense. We found that the objectives very quickly became redundant and it was an all-out team deathmatch for 6 hours.

Which, if you're new to the game, might be a lot of fun.

But for more experienced players who enjoy the thrill of objective-based matchmaking; it's not enjoyable.

Then, to top it off, there were complaints about people not taking their hits. Which is fair enough.

However... in most situations, marshalls deal with this like so:

'If we catch you cheating, you're out'.

This is how the head marshall at Anzio Camp decided to deal with it:

'We've had multiple complaints about people not taking their hits. Because it's freezing today, people are wearing more layers than usual which means hits are sometimes not felt. So, if you don't feel it, hear it, or see it, but you don't call your hit, you're bounced from the game. We'll give you ten minutes to de-layer before we start our next game'.

Let me recap that for you.

If you didn't shout 'hit!' because you didn't hear, see or feel it - you're out of the game.

That's not a lie. That's not an embellishment. A lot of players questioned the logic but the marshalls stood firm on this ridiculous concept.

This is when we decided to call it a day (over an hour early).

Overall, the site was a huge disappointment for us.

If you're not concerned about using grenades or extremely confusing (and bendable) rules, then it might be worth the trip.

But for experienced players who enjoy a structured, fun, and well-run airsoft site, Anzio Camp, unfortunately, isn't it.

Again, this is our personal view. We don't want to dissuade you from visiting Anzio Camp. In fact, we encourage it. All of Anzio Camp's information is listed on this page for booking, prices and directions to the site. Give it a go and let us know what you think!

£35 per player
Book Online
We have done our best to get reliable information about airsoft sites, but we cannot be held responsible for validity or accuracy of any of the information shown here.
Popular Guides
Beginners Guide To AirsoftHow Much Does Airsoft Cost?Does Airsoft Hurt?
About
Editorial Guidelines
First Airsoft is the go-to source for everything airsoft. We're a small team of experience airsoft players committed to helping you become a better play. Move fast, stay low, aim straight.